From the author of The Rope Walk, the story of a woman’s life in its twilight, as she looks back on both a harrowing childhood and the unaccountable love and happiness that emerged from it.

Ruth has always been the headmaster’s wife — the kind of woman who has stood steadfastly at the side of her upstanding, brilliant husband Peter, the legendary chief of the Derry School for boys. The childless couple has a unique and passionate bond, which grew out of the strange devastation of Ruth’s childhood and her arrival on his family’s doorstep as a girl orphaned by tragedy; Ruth, the lifelong helpmeet, sometimes frustrated by her role, is equally awed by her good fortune in having found him. As the novel opens we see the Derry school in all its glorious fall colors and witness the loosening of the aging Peter’s grasp — he will soon have to retire, and Ruth is wondering what it has all been for, as well as what they will do in their old age, separated from the school, into which they have poured everything, including their savings. The novel takes us back through their days and years, revealing the explosive spark and joy of their love, undiminished now in their seventies. A deeply felt portrait of a woman from the generation that quietly put their dreams aside for the good of a partnership, and the surprising gift of the right man’s love, which keeps giving to the end. 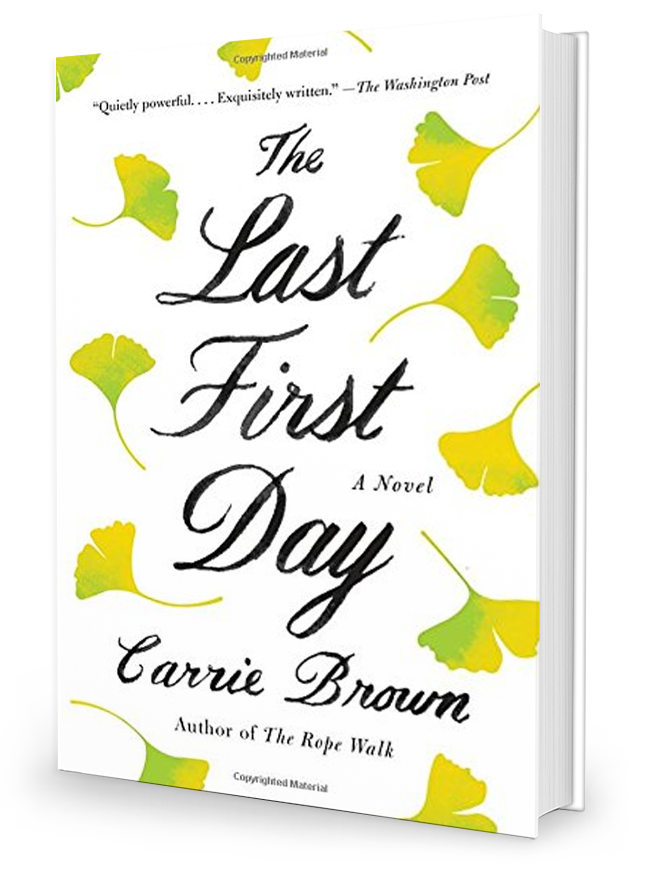 “In her wonderful new novel, Carrie Brown takes on those greatest of human mysteries: enduring love, the long marriage. There’s pathos here, cause for wonder, reasons to believe.”
Christopher Tilghman
Author of The Right-Hand Shore and Mason’s Retreat
“Carrie Brown has accomplished one of literature’s most difficult feats — to write compellingly, and convincingly, about human happiness. The Last First Day is marvelous.”
Ron Rash
Author of Serena and The Cove
“Concessions have to be made for many things, but concessions made for love are the ones that live on in life and in literature. In a beautifully composed novel, Carrie Brown reminds us of the concessions made for love, of hope and fear shared and endured alone, of joy and sorrow as the undercurrents of life. This is an intimate novel to be relished and remembered.”
Yiyun Li
Author of The Vagrants and Gold Boy, Emerald Girl
“A beautiful piece of writing: bittersweet with nostalgia, surprisingly sensual and sharply nuanced in its depiction of the strains and rewards that shape any long marriage… A restrained yet emotionally powerful portrait of enduring love.”
Kirkus Reviews
.
“Beautifully written, with deeply memorable characters, The Last First Day is a powerful examination of love across the years and a heartfelt story of the strength of unbreakable bonds.”
Carol Gladstein
Booklist
“The Last First Day is a beautiful account of one woman’s life as she views it from the vantage point of old age… It is a treat to delve into the layers present in this novel, and get to know its multifaceted protagonist at a depth few books ever achieve.”
Bustle
.

Interviews with the Author

2013 Finalist for the Library of Virginia’s Book Award